Ritter Communications is pleased to announce $207,892 was raised at the 38th Annual St. Jude Country Cares for Kids Radio and Cablethon Friday and Saturday, March 2 and 3, 2018 in Blytheville, Arkansas. All money raised benefits St. Jude Children’s Research Hospital, one of the world’s premier centers for the research and treatment of childhood cancer and other catastrophic diseases. This year’s Cablethon marked Ritter’s 11th year broadcasting the event, and during those 11 y

( Poinsett County, Arkansas) Deputies with the Poinsett County Sheriff Department executed a search warrant late Saturday morning at 40079 Howard Road, Tyronza, AR. The search warrant stemmed from an occupant of that residence having sold a gun to a pawn shop that had previously been reported as stolen to the Harrisburg Police Department in September of 2017. During the investigation, detectives found that the suspect, identified as Andy Tacker, 22, of Tyronza was posting l 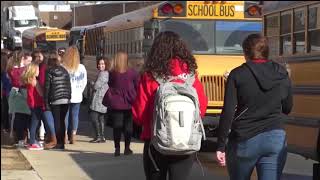 Westside E.A.S.T. facilitator Brooke Chapman is on the fence about President Trump's proposition to pass legislation allowing teachers to carry concealed weapons in classrooms. Her focus is in being proactive, rather than reactive. "The most important thing is that we know our students," says Chapman. "And [that] we are diligent in learning about our students, and if they have an issue. And reporting it to someone that can get them the proper help. I think if we do that, then 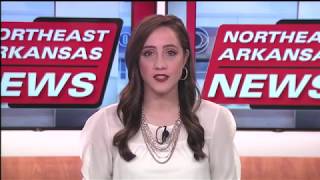 City councilman Joe Hafner is presenting a sidewalk ordinance this year, that if passed will require that all new commercial and residential constructions in Jonesboro include a sidewalk. Hafner's hope is that it will improve mobility for pedestrians traveling to and around the city. "Walkability is important and connectivity is important," states Hafner. "Not only from an economic development standpoint. People want to move to cities where they're going to feel safe. And whe

COO Tanner to leave City for private sector City of Jonesboro Chief Operations Officer Ed Tanner announced Friday his intentions to resign in order to take a private-sector position in the city. Tanner served the city since August 2016, overseeing a large portion of the city’s non-uniform employees, including directors of parks and recreation, streets, sanitation, engineering, planning, JET bus service, E-911, facilities maintenance and inspections. “I’m very grateful to the

Huron Presents Revenue, Efficiency Opportunities to ASU Board of Trustees

BEEBE, Ark. – Huron Consulting Group today outlined a series of recommendations to the Arkansas State University System that would increase revenue, cut costs and improve efficiencies. A summary of the Accelerate ASU study findings was presented to members of the ASU Board of Trustees at its meeting on the ASU-Beebe campus. Andrew Laws, managing director with Huron, said about one-third of the recommendations are revenue opportunities and two-thirds are efficiencies and savin

For Kyle Beeson the Southridge Volunteer Fire Department has been a part of his life since he was a kid. “Muscle memory came in got my turnouts on, got ready, started help pulling hose and that kind of stuff”, said Beeson recalling his first house fire. Now 18, he has decided to make it a part of his purpose after the first time he got called out to a house fire, “That’s when I first realized this is real, I’m really getting into it. I’m here to do a job and I’m getting it do
{"items":["5fc90f40766b330017870287","5fc90f40766b330017870283","5fc90f4072ec310017dfbae8","5fc90f4072ec310017dfbae6","5fc90f40766b330017870284","5fc90f40766b33001787028c","5fc90f40ada3f6001790662f"],"styles":{"galleryType":"Columns","groupSize":1,"showArrows":true,"cubeImages":true,"cubeType":"fill","cubeRatio":1.3333333333333333,"isVertical":true,"gallerySize":30,"collageAmount":0,"collageDensity":0,"groupTypes":"1","oneRow":false,"imageMargin":32,"galleryMargin":0,"scatter":0,"rotatingScatter":"","chooseBestGroup":true,"smartCrop":false,"hasThumbnails":false,"enableScroll":true,"isGrid":true,"isSlider":false,"isColumns":false,"isSlideshow":false,"cropOnlyFill":false,"fixedColumns":1,"enableInfiniteScroll":true,"isRTL":false,"minItemSize":50,"rotatingGroupTypes":"","rotatingCropRatios":"","columnWidths":"","gallerySliderImageRatio":1.7777777777777777,"numberOfImagesPerRow":1,"numberOfImagesPerCol":1,"groupsPerStrip":0,"borderRadius":0,"boxShadow":0,"gridStyle":1,"mobilePanorama":false,"placeGroupsLtr":true,"viewMode":"preview","thumbnailSpacings":4,"galleryThumbnailsAlignment":"bottom","isMasonry":false,"isAutoSlideshow":false,"slideshowLoop":false,"autoSlideshowInterval":4,"bottomInfoHeight":0,"titlePlacement":"SHOW_ON_THE_RIGHT","galleryTextAlign":"center","scrollSnap":false,"itemClick":"nothing","fullscreen":true,"videoPlay":"hover","scrollAnimation":"NO_EFFECT","slideAnimation":"SCROLL","scrollDirection":0,"scrollDuration":400,"overlayAnimation":"FADE_IN","arrowsPosition":0,"arrowsSize":23,"watermarkOpacity":40,"watermarkSize":40,"useWatermark":true,"watermarkDock":{"top":"auto","left":"auto","right":0,"bottom":0,"transform":"translate3d(0,0,0)"},"loadMoreAmount":"all","defaultShowInfoExpand":1,"allowLinkExpand":true,"expandInfoPosition":0,"allowFullscreenExpand":true,"fullscreenLoop":false,"galleryAlignExpand":"left","addToCartBorderWidth":1,"addToCartButtonText":"","slideshowInfoSize":200,"playButtonForAutoSlideShow":false,"allowSlideshowCounter":false,"hoveringBehaviour":"NEVER_SHOW","thumbnailSize":120,"magicLayoutSeed":1,"imageHoverAnimation":"NO_EFFECT","imagePlacementAnimation":"NO_EFFECT","calculateTextBoxWidthMode":"PERCENT","textBoxHeight":0,"textBoxWidth":200,"textBoxWidthPercent":50,"textImageSpace":10,"textBoxBorderRadius":0,"textBoxBorderWidth":0,"loadMoreButtonText":"","loadMoreButtonBorderWidth":1,"loadMoreButtonBorderRadius":0,"imageInfoType":"ATTACHED_BACKGROUND","itemBorderWidth":1,"itemBorderRadius":0,"itemEnableShadow":false,"itemShadowBlur":20,"itemShadowDirection":135,"itemShadowSize":10,"imageLoadingMode":"BLUR","expandAnimation":"NO_EFFECT","imageQuality":90,"usmToggle":false,"usm_a":0,"usm_r":0,"usm_t":0,"videoSound":false,"videoSpeed":"1","videoLoop":true,"jsonStyleParams":"","gallerySizeType":"px","gallerySizePx":670,"allowTitle":true,"allowContextMenu":true,"textsHorizontalPadding":-30,"itemBorderColor":{"value":"#000000"},"showVideoPlayButton":true,"galleryLayout":2,"targetItemSize":670,"selectedLayout":"2|bottom|1|fill|true|0|true","layoutsVersion":2,"selectedLayoutV2":2,"isSlideshowFont":false,"externalInfoHeight":0,"externalInfoWidth":0.5},"container":{"width":670,"galleryWidth":702,"galleryHeight":0,"scrollBase":0,"height":null}}
1234
5