Petition Process to Change Randolph County to a Wet County

Randolph County has been a dry county since 1948. Linda Bowlin is one of the 17-thousand people living in Randolph County. Bowlin says she is tired of the inconveniences that come with being a dry county, “Wet counties want us to go there to buy alcohol. We don’t want to drive anymore. You know we want to come up into the 21st century and be like other counties”. Bowlin helped lead a group formerly known as Keep Revenue in Randolph. In 2016 they hired a company to get signatu

JONESBORO - Arkansas State University's online nursing program has earned a ranking among the nation's best programs, according to NurseJournal.org. The program stands at 16th in the list of 509 online nursing schools evaluated by the publication. "We continue to be so proud of our nursing programs," said Dr. Susan Hanrahan, dean of the College of Nursing and Health Professions. "This recognition reaffirms our commitment to quality and our ability to work with our students to 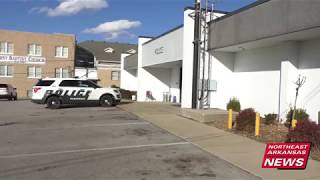 Phones and computers are now installed in the new Paragould Emergency Services Center on South Point Drive, about five miles away from the Paragould Police Department. The new facility contains its own water and air supply system. Paragould Police Captain Brent McCain says the building itself should be able to withstand an f-5 tornado. "We were already outgrowing the present location, so we decided to go ahead and build a new facility, and merge facilities together to give a

(update Four arrests were made and approximately 70 items were recovered. Four subjects arrested in early morning vehicle break-ins Jonesboro Police Department detectives are investigating early morning arrests that has yielded numerous items of evidence from vehicle break-ins this morning. At approximately 1:50 a.m. on Thursday, January 25th 2018, patrol officers responded to a call of a suspicious vehicle in the HIll Dr area of Jonesboro. Officers were told that an occupant

STUTTGART, Ark. – Learn to make the best use of your irrigation this growing season through schools being offered by the University of Arkansas System Division of Agriculture. The Division of Agriculture is offering two types of schools: one for using Multiple Inlet Rice Irrigation, and the other a Surge and Soil Moisture Sensor School that covers surge valve use and layout. This school will also teach the basics of soil moisture sensors and how to use them to schedule irriga

Scott Ellington, Prosecuting Attorney for the Second Judicial District, announced today that there will be a hearing on Wednesday, January 24, 2018 at 8:30 a.m. before the Hon. Cindy Thyer, Circuit Judge, in the case of State of Arkansas vs. Dwalin Woods, CR-2017-166. Woods is accused of the January 20, 2017 armed robbery of the Valero gas station in Bay, in which the attendant on duty was shot and seriously wounded. There will be victim impact testimony. Further detai 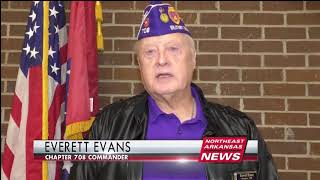 12-year-old Kyleigh Boone is a 6th grade student at Greene County Tech Middle School. She is also a world class pecan pie baker, on a mission to raise funds for purple heart veterans, one bake sale at a time. "Pecan pie is my favorite kind of pie -- my grandma taught me how to make it," says Kyleigh, "I entered one of my pies in the fair, and I won first place." Kyleigh sold her award-winning pecan pies during Thanksgiving and Christmas. In January, she presented to Chapter 7

JONESBORO – The Delta National Small Prints Exhibition (DNSPE) at Arkansas State University’s Bradbury Art Museum opened Thursday, with winning selections for purchase awards and sponsorships announced. The Delta National Small Prints Exhibition is in its third decade with works in this year's exhibition ranging from traditional imagery and printmaking techniques, such as engraving and lithography, to monotypes and experimental print mediums. The DNSPE is made possible by man

JONESBORO - Maurice Gipson becomes the first cabinet-level chief diversity officer for Arkansas State University, Chancellor Kelly Damphousse announced today. Gipson served the past three years as an assistant vice chancellor for diversity, and his area, the Office of Diversity and Community Engagement, will now report directly to the Chancellor's Office. "Because Arkansas State University is dedicated to the ideals of community and inclusive excellence, it is vital that our 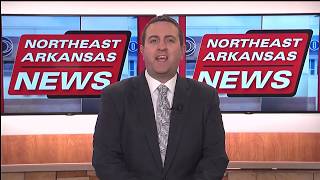 Mayor Harold Perrin ran through his top projects for 2018 in his State of The City Address at Cooper Alumni Center. It includes widening South Caraway and Harrisburg roads, and adding right-turn deceleration lanes to help traffic flow smoother. "We're looking at grants, and we're looking at some of the other deals." says Perrin, "We're looking at public/private foundations. We've never done that before, to go call on Kellogg's Foundation...some of those people. And see if the
{"items":["5fc90f4003614100173dd40a","5fc90f4003614100173dd402","5fc90f403837110017bea5c7","5fc90f4003614100173dd403","5fc90f4003614100173dd405","5fc90f4003614100173dd401","5fc90f4003614100173dd408","5fc90f4016bdf80017430c05","5fc90f4016bdf80017430c04","5fc90f4003614100173dd407"],"styles":{"galleryType":"Columns","groupSize":1,"showArrows":true,"cubeImages":true,"cubeType":"fill","cubeRatio":1.3333333333333333,"isVertical":true,"gallerySize":30,"collageAmount":0,"collageDensity":0,"groupTypes":"1","oneRow":false,"imageMargin":32,"galleryMargin":0,"scatter":0,"rotatingScatter":"","chooseBestGroup":true,"smartCrop":false,"hasThumbnails":false,"enableScroll":true,"isGrid":true,"isSlider":false,"isColumns":false,"isSlideshow":false,"cropOnlyFill":false,"fixedColumns":1,"enableInfiniteScroll":true,"isRTL":false,"minItemSize":50,"rotatingGroupTypes":"","rotatingCropRatios":"","columnWidths":"","gallerySliderImageRatio":1.7777777777777777,"numberOfImagesPerRow":1,"numberOfImagesPerCol":1,"groupsPerStrip":0,"borderRadius":0,"boxShadow":0,"gridStyle":1,"mobilePanorama":false,"placeGroupsLtr":true,"viewMode":"preview","thumbnailSpacings":4,"galleryThumbnailsAlignment":"bottom","isMasonry":false,"isAutoSlideshow":false,"slideshowLoop":false,"autoSlideshowInterval":4,"bottomInfoHeight":0,"titlePlacement":"SHOW_ON_THE_RIGHT","galleryTextAlign":"center","scrollSnap":false,"itemClick":"nothing","fullscreen":true,"videoPlay":"hover","scrollAnimation":"NO_EFFECT","slideAnimation":"SCROLL","scrollDirection":0,"scrollDuration":400,"overlayAnimation":"FADE_IN","arrowsPosition":0,"arrowsSize":23,"watermarkOpacity":40,"watermarkSize":40,"useWatermark":true,"watermarkDock":{"top":"auto","left":"auto","right":0,"bottom":0,"transform":"translate3d(0,0,0)"},"loadMoreAmount":"all","defaultShowInfoExpand":1,"allowLinkExpand":true,"expandInfoPosition":0,"allowFullscreenExpand":true,"fullscreenLoop":false,"galleryAlignExpand":"left","addToCartBorderWidth":1,"addToCartButtonText":"","slideshowInfoSize":200,"playButtonForAutoSlideShow":false,"allowSlideshowCounter":false,"hoveringBehaviour":"NEVER_SHOW","thumbnailSize":120,"magicLayoutSeed":1,"imageHoverAnimation":"NO_EFFECT","imagePlacementAnimation":"NO_EFFECT","calculateTextBoxWidthMode":"PERCENT","textBoxHeight":0,"textBoxWidth":200,"textBoxWidthPercent":50,"textImageSpace":10,"textBoxBorderRadius":0,"textBoxBorderWidth":0,"loadMoreButtonText":"","loadMoreButtonBorderWidth":1,"loadMoreButtonBorderRadius":0,"imageInfoType":"ATTACHED_BACKGROUND","itemBorderWidth":1,"itemBorderRadius":0,"itemEnableShadow":false,"itemShadowBlur":20,"itemShadowDirection":135,"itemShadowSize":10,"imageLoadingMode":"BLUR","expandAnimation":"NO_EFFECT","imageQuality":90,"usmToggle":false,"usm_a":0,"usm_r":0,"usm_t":0,"videoSound":false,"videoSpeed":"1","videoLoop":true,"jsonStyleParams":"","gallerySizeType":"px","gallerySizePx":670,"allowTitle":true,"allowContextMenu":true,"textsHorizontalPadding":-30,"itemBorderColor":{"value":"#000000"},"showVideoPlayButton":true,"galleryLayout":2,"targetItemSize":670,"selectedLayout":"2|bottom|1|fill|true|0|true","layoutsVersion":2,"selectedLayoutV2":2,"isSlideshowFont":false,"externalInfoHeight":0,"externalInfoWidth":0.5},"container":{"width":670,"galleryWidth":702,"galleryHeight":0,"scrollBase":0,"height":null}}
1
2
34